Fully Charged is brand new and will help you train and race harder no matter what activity you do. Plant-based REAL ingredients will keep you going faster and stronger. 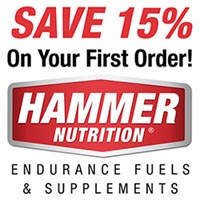 My preparation for Wasatch this year was somewhat better than last year (check out my past race results).  I put in about the same amount of mileage as last year but with less racing in 2013.  Instead,this year I focused on playing in spectacular places such as Glacier and Grand Teton National Parks and the Beartooth Wilderness area. As I saw it, the one advantage I had this year over last year is that for the 4 months prior to the 2013 Wasatch, I ate fruitarian.  That’s right, I ate 99% just fruits and vegetables.  I was curious…and nervous, to see if going fruitarian would contribute to my success or possibly my failure.

The night before Wasatch, Lindsey and I slept under the stars at the start of the race.  It was spectacular and we got a good 3 hours of sleep.  The start of the race approached and like always, I saw lots of friends and wished them a great day.

And just like that, me and a couple hundred other runners were off into the darkness at 5 am.  The first 20 miles I enjoyed chatting with other runners and I quickly fell into my groove.  It was refreshing  to have company before the long day ahead.

I felt great for the first 30 miles.  However, during one long descent, I started feeling my quads more than usual so early in the race.  I knew this would be a very rough day for me! So I did what I normally do which is focus on my running technique.  In this case, it meant focusing on engaging my core to help absorb the impact of the very long downhills. Temperatures were pushing 95 degrees and I did everything I could to stay cool including put ice under my hat, stay wet, drink sufficient fluids and maintain adequate electrolyte balance.  However, I reached the Big Mountain aid station incredibly hot and more fatigued than I wanted.  My excellent crew was there to greet me and take care of me.  They included my wonderful dad, amazing girlfriend Lindsey, and super helpful brother Alex.  A few minutes of care and off I went.

The next section was the hottest part of the day.  It was hard to consume enough calories, drink enough fluids and stay cool.  I was ready to puke, quit and pass out all at the same time.  “Just get to Lambs aid station”, I kept telling myself.  Miles 45-52 were some of the most challenging of my life.  It was fairly flat but the heat was unbearable.  I decided I would get to Lambs and quit.

Seeing my crew and family after running 52 miles is just heaven.  I ran in, knowing I would quit but not wanting to tell them just yet.  They cooled me off, gave me food and provided the support I desperately needed.  I whispered to Lindsey that I was “cooked”, “done” and ready to “quit”.  She didn’t say much, but I knew she supported me no matter what…as long as that meant keep going. Luckily for me, my brother Alex decided to jump in and pace me.  He’d run with me to Brighton.  To have a brother physically fit enough to jump in to help at any time is pretty cool.  I take him for granted and can’t thank him enough.  I finally decided to get going and we took off from Lamb’s with me thinking, “I’ll just quit at the next aid station” which was about 8 miles up.

I spent the next hour trying to refuel, cool off and rehydrate which I slowly did.  Alex and I reached the next aid station and I felt somewhat better.  I decided, “I’ll just make it to Brighton” which is at mile 75.  Then I’ll quit.  We continued to run together and had a blast. Darkness fell and we put on our headlamps.  I serenaded Alex with hits of the 80’s and 90’s.  I know he enjoyed it because my singing is pretty good.  We finally reached Brighton where I again was ready to give up.  But, luckily for me, Lindsey found a willing fool to pace me to the finish.  This was just what I needed since I was adamant about quitting (at least to myself) and especially not wanting to head into the darkness alone knowing and afraid my legs wouldn’t carry me the rest of the way.

The spontaneous fool that joined me was Nate Blouin and I cannot thank him enough for joining me on my adventure.  He was positive, funny and very helpful.  Slow and steady we kept ticking off the miles.  I was tired, grumpy and ready to be done but still had to do some tremendous work to reach my final goal.  Miles 82-92 were the longest of my life and Nate did the best he could to keep me going.  Ultra races are crazy (and addictive) because of the extreme highs and lows both mentally and physically.  One minute I felt on top of the world and the next I felt ready to give up and melt into the ground.

Fortunately, I got into mile 92 feeling pretty good.  From here, the race was mostly on a dirt road which allowed me to pick up the pace quite a bit.  So off we ran.  I am very proud to say that for the last 6 miles, I ran almost every step of the way.  Finally, we could see the finish and like always, I started getting very emotional.  I couldn’t get to the finish line fast enough for I was excited to see my family, hug Lindsey and be done.  I sprinted (probably running 6 mph) into the finish where I embraced them and couldn’t have been more happy. After wanting to give up so badly and so often, I finally reached my goal in a time of 24:15:51 in 13th place.  It was a tremendous feeling of accomplishment and joy.

I couldn’t have achieved my goal without the support of so many people.  I want to thank my family, especially my dad and Alex for supporting me.  Without Lindsey’s encouragement and positive energy, I could not have reached the finish.  I also want to thank Nate for helping me get to the finish.  And finally, I’d like to thank all the volunteers and race directors for helping myself and hundreds of others achieve something they will never forget.

It is now a week after the race.  I am amazed at how quickly I have recovered.  I have already gone for a few runs and feel wonderful.  I attribute my quick recovery and ability to run such long distances completely injury-free while performing well to several things. First, to my dedicated practice of an efficient running technique which I also teach. Eating vegan greatly contributes to my performance and health.  I greatly appreciate the support of my sponsors.  For shoes, I wore the Altra Superior’s which were awesome, check them out HERE. I used mostly Hammer Nutrition to fuel me during the race. Macrolife Naturals also contributed to my performance, quick recovery time and overall health.

So will I do Wasatch next year?  Maybe.  Right now I’m focused on doing another 100 miler sometime in October.  I said it was addicting right…